India’s first start-up of superheroes with a mission of saving lives is here to kick ass.

Rasiq is riding the highs of life thanks to his successes as an investment banker. But his arrogance soon gets the better of him and he ends up losing everything he holds dear. Managing to salvage only his grit from the wreckage, Rasiq reboots his life and teams up with five uniquely talented superheroes to start a rescue venture
– DareDreamers.

These superheroes Nick: a crazy inventor; Halka: an inhumanly strong man; Arjun: a champion shooter; Natasha: a Bollywood stunt-double; Dr. Vyom, a medical Sherlock Holmes; and, of course, Rasiq: the mastermind combine their unique talents to deliver spectacular rescue operations. Their skyrocketing success, however, comes at a price an enemy hell bent on tearing down their fame and reputation.

Will DareDreamers defeat its wily adversary? Or will it become yet another failed start-up? 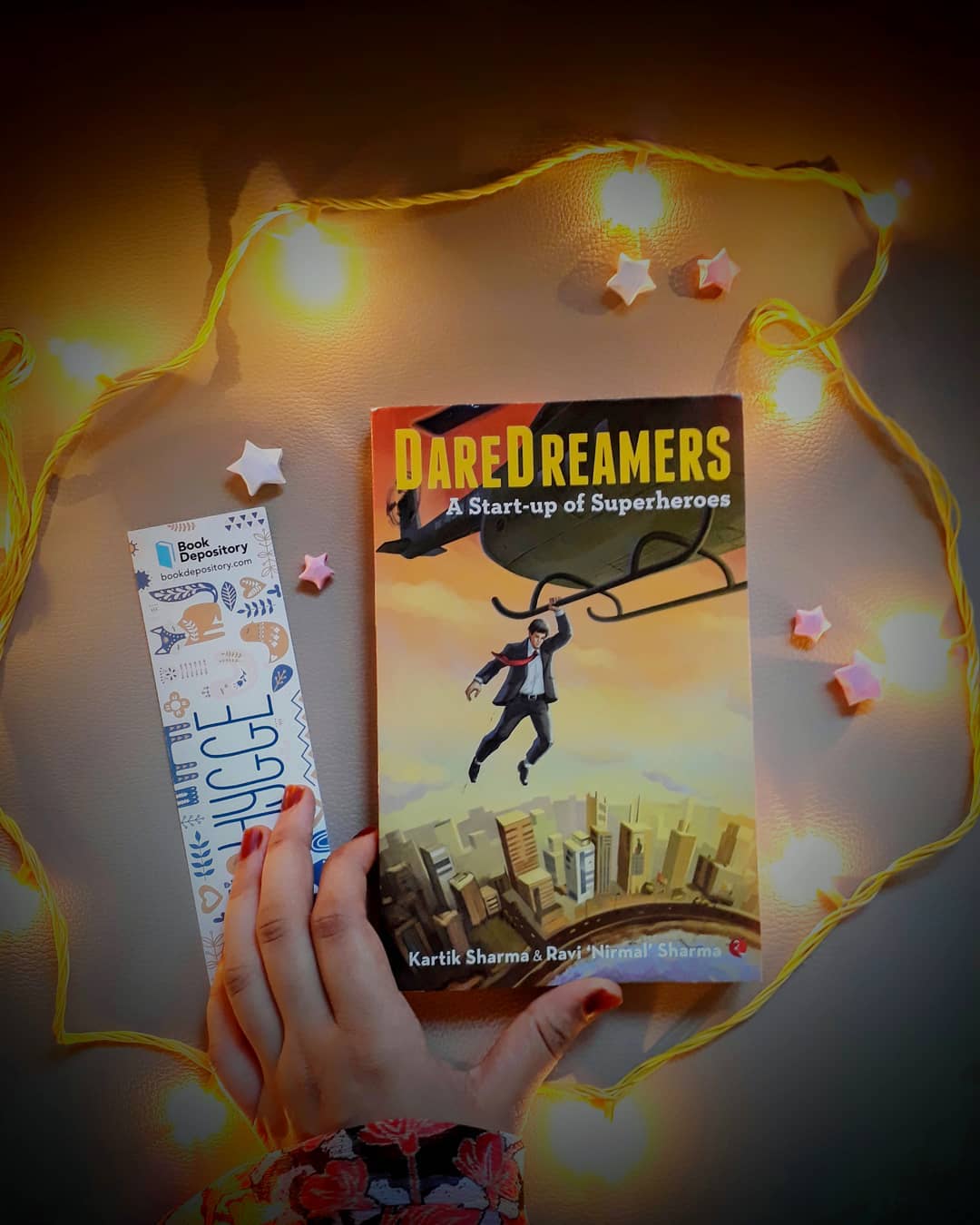 A rarity in Indian contemporary literature, DareDreamers by Karthik and Ravi Sharma, is the story of Rasiq and the unique startup he builds from scratch. It’s written by a father-son duo which itself is awe-inspiring. This book reminded me of Six of Crows in a way, except, instead of a band of misfits, we have a band of superheroes whose vision is to save lives.

Rasiq has been idling a lot after he quit his insanely high-paying job as an investment banker. After years of contemplation, he works on an idea for a start-up to provide safety solutions at all times. The idea behind DareDreamers is to provide an expert’s hand in every possible field that might be required to save a life at an emergency. For this, Rasiq compiles a team of 6 people, all with amazing skills in their respective fields. A sharpshooter, a Bollywood stunt artist, an engineering mastermind, a pilot, a doctor with exceptional diagnostic skills and Rasiq himself, with his ability to analyze and come up with a plan for every situation. Together, they garner attention for their extraordinary rescue-missions. But with fame and recognition comes competition and foes. Things go horribly wrong all of a sudden. Rasiq and his team have one last mission to execute, which is to prove their innocence and worth to everyone once again.

The book started a bit slow, with Rasiq working as an investment banker and contemplating his reason for existence. Although it was slow, I really liked how the authors took the time for character development. Rasiq’s growth as a character is incredibly well-done. And then, after DareDreamers started, it became fast-paced and adrenaline-filled. The action scenes were really good and well-executed. I applaud the authors for the research work that went into this book. They know what they are writing about; it is informative and brilliant. The coordination between the 6 main characters and their bond that stayed strong even in the face of adversities was commendable. It is all backed with an engaging and powerful writing style. The authors’ styles blend in so much that I can’t point out the differences. It’s been so long since I encountered a book by Indian authors with an exceptional writing style.

If there was anything I didn’t like about this book, it was the sudden sprout of a romantic relationshipS. I won’t give away any spoilers, but I actually had two pairs in mind, but what happened was completely different. It was out of the blue and I couldn’t really accept it. Nevertheless, that must just be me, but I do feel that there could have been more of development regarding their growth.

The ending, the acknowledgment by the authors, were all really good. I’m really glad to have discovered this gem. If you are looking for some action and adventure-filled books written by Indian authors, look no further. With this, I can confidently say that I wouldn’t hesitate to pick up another book by Karthik and Ravi Sharma.

Kartik Sharma, a graduate of Indian Institute of Technology (IIT) Delhi and Indian Institute of Management (IIM) Ahmedabad, is passionate about books. Be it reading or writing, he found his one true passion in the written word.
Published at the age of 23 by Rupa Publications in September 2011, he continues to write fiction stories and philosophical musings on his blog: http://interlocutor-kasper.blogspot.in/ and also at https://medium.com/@sykartik
He quit his investment banking career in 2012 to devote more time to writing. He is currently working on his second novel which he promises to be “fueled with philosophy and at the same time encapsulated in science fiction”

View all posts by Fuzaila